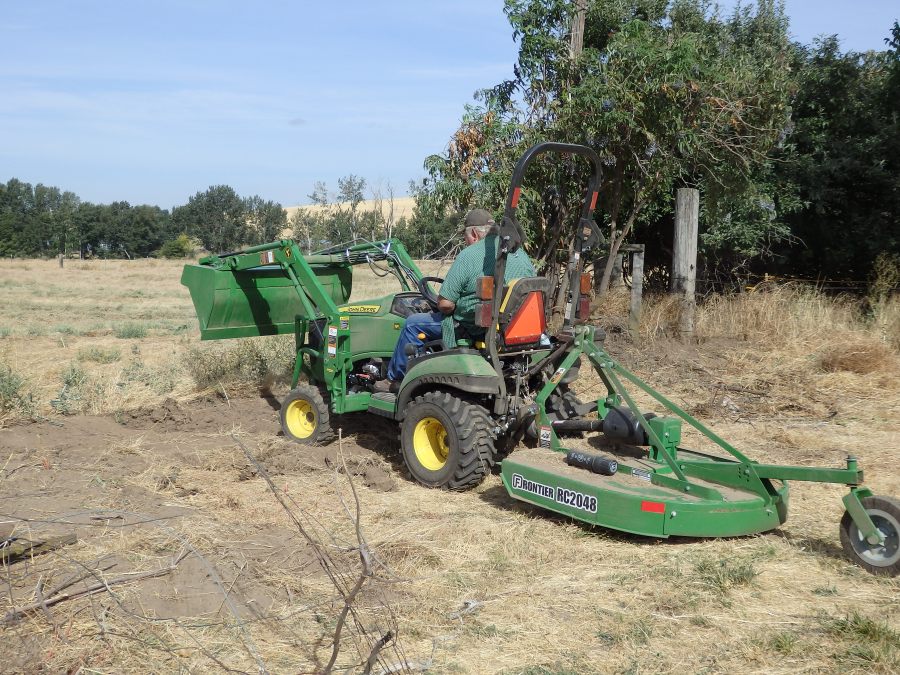 Back to working on the fence.

I believe I will be spending every weekend doing something around the yard since winter’s coming.

Lynn took out the big guns, his Father’s Day Present, a John Deere Tractor. He kept telling me he wanted a loader on a tractor, but I said what for? I had to eat those words, he’s used the loader more than any other attachment except the brush cutter.

He used it today to try to smooth out the fence line and for hauling away old fence posts and brush. He loves that tractor, and I’m glad because he actually gets out there and helps. Granted I have to load the posts in the bucket along with the brush, but hey it’s getting cleaned up, and that makes me happy.

We went out there this morning, ready with the marking paint to mark out every 8 feet for the posts to go back in. First we (I) strung a line from one end to the other end and pulled it straight. The supervisor sitting on the John Deere said it was too high! Well, it stayed where it was.

Measured the first 8 feet and tried to used the handy-dandy marking paint and it didn’t work. It was probably the way I was holding it or not holding it, but in the end I got paint on my pants, on my boots and on my gloves, but none on the ground.

Alrighty then, I would be putting the posts in and that would mark the spots. Just skipped a step.  Works for me. The handy-dandy fence post driver was heavy. I had done this before, but that was at least 25 years ago. I don’t remember it being so heavy. I just had to Google to see just how much that puppy weighed. It said 27 pounds for big bertha. That sounds about right, though it felt heavier toward the end. But I figured out a system, and the ground was loose so they went in easy. Now I need to compact the dirt around the posts and that will take a little watering.

12 posts later and we are almost half way there. Ran out of posts. The supervisor will be hunting up some more tomorrow. He thinks he has a few in some of the sheds. Usually we are tripping over them, but when you need them you can’t find them.

That plumb wore me out. It took us about 3 hours to get that done and I was running on about 4 hours of sleep last night. Wasn’t a fun night. That’s it for the outdoor work this weekend. Tomorrow it’s back to work and I’m meeting with the propane guy tomorrow to see when we can get the tanks put in and then comes the stove/fire place. I will be warm this winter.

Of course I will take pictures to show you, and it will actually be someone else installing that. Thank Goodness. Did I mention I want out of the do-it-yourself business? Maybe some day I can sit on that porch and drink ice-tea. Maybe next year, got too much to do this year.

The supervisor will be hooking up the chain saw and cutting a thick branch off the elderberry tree that is actually right in the way of the fence.

Now for some pictures. As soon as I find that picture thingy, again. 😦

Well that’s all folks. See you next weekend.

This site uses Akismet to reduce spam. Learn how your comment data is processed.